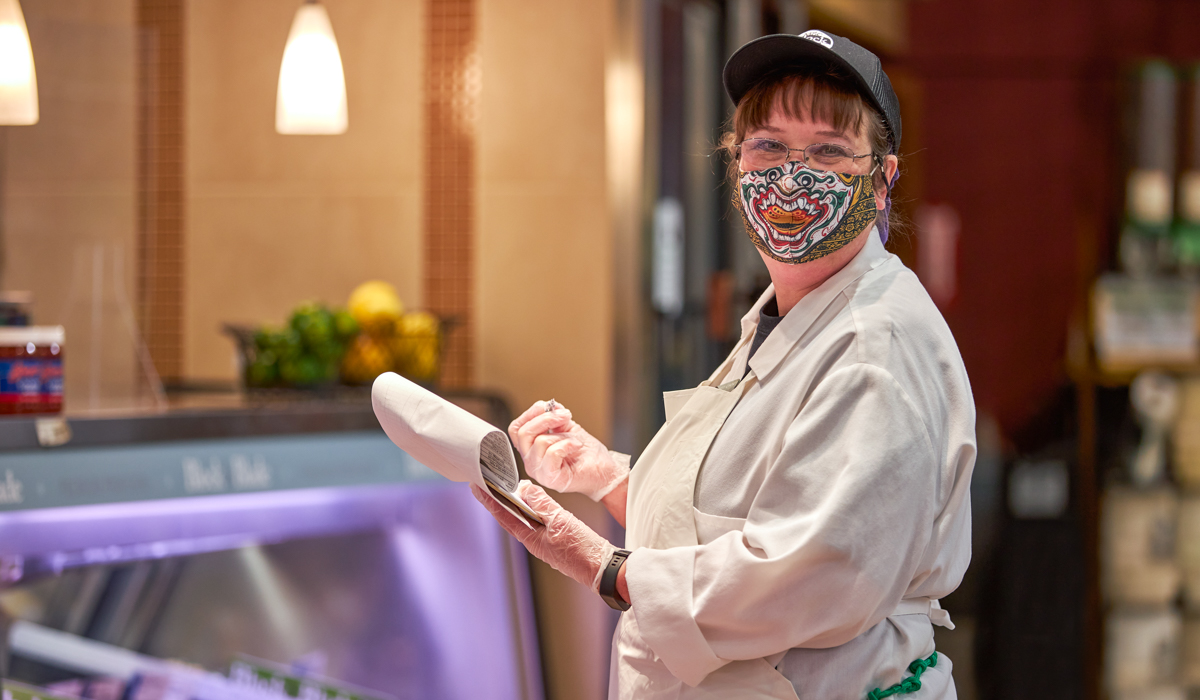 Diana says for much of her life, she never had much interest in cooking. But all that has changed in recent years – thanks, in part, to her job.

“For the longest time, my idea of cooking was to vent the lid, put it in the microwave, dirty a fork, and that’s it,” she says. “I could roast a chicken and vegetables. I could make a steak, but outside of that, no … I was not always passionate about food.”

Her experiences working at our Delta Oaks Market in Eugene has greatly expanded her interest and expertise in meal preparation, she says. So much so, in fact, that she regularly trades recipes with customers, some of whom frequently ask her for tips and new ideas.

“I have a little bit of a following,” Diana says with a laugh. “I love sharing recipes with customers. I have customers who come back and say, ‘You should make a cookbook or something because your recipes are so great.’”

Of course, the tips can go both ways. “One of my favorite recipes came from a customer,” she says. “He said cooking a pork shoulder roast in a crockpot with apple juice was like the best. I went home and did it, and I was hooked.”

Diana has learned to be open to new ideas. She’s spent 16 years at the Delta Oaks store, most of that time in the Seafood Department, where she’s now a trained and experienced Fishmonger. She had no inkling that’s where she’d end up when she started, however.

When she first moved to Eugene, she stopped by Market of Choice while job hunting to grab something to eat. The cashier happened to mention that she might enjoy working there, and Diana decided to apply.

She started out as cashier, but with her previous experience in management at another retailer, she was placed in a management-in-training program and soon moved into Human Resources. After more than a year, she was ready for a change of pace.

“I decided to try something completely outside of my comfort zone,” she says.

In what may have seemed an unusual proposition, she decided to swap jobs with someone else in the store who had an interest in gaining experience in Human Resources. His job was in the Meat Department.

The move was a challenge, yet despite not having any experience in the Meat Department, Diana embraced it. She studied and learned all she could about meat and meat preparation and became really good at her job.

A few years later, she moved over to seafood. She didn’t know much about preparing seafood at the time, but she loves seafood and was ready to learn. When it comes to salmon, Diana says, her favorite variety is “whatever’s on the plate in front of me.”

Memories of fishing trips with her grandfather while growing up is one of the many reasons she enjoys seafood. “We would go out at night, my sister and I would catch nightcrawlers so we could go fishing with grandpa,” she recalls.

Over the years, Diana has become an expert in all things seafood. She’s gone so far as to ask a crab fisherman at the Oregon Coast for inside tips about picking the best crab. She’s gone on company field trips to learn all about the business. She loves that Market of Choice offers employees those kinds of experiences.

“I love the fact that you’re not just another cog in the machine here,” she says. “You know you are considered a very important person, no matter what you’re doing.”

When she’s not at work, she enjoys spending time at home with her husband and her two rescue dogs. She likes to stay busy doing crafts, gardening and cooking — especially baking.

There’s one other thing she loves about her job – her husband works at the same store. They met at Market of Choice, and he works in the Produce Department. As Diana likes to say, “We go together like meat and potatoes.”