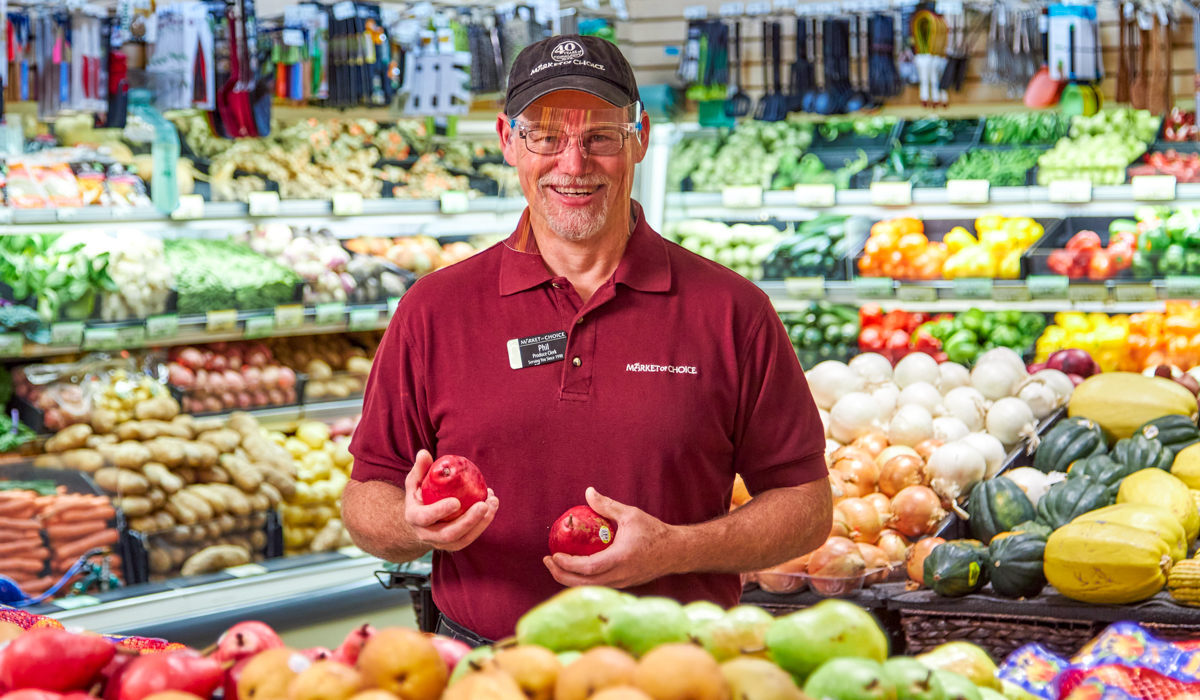 As a kid growing up on a farm in west Eugene, Phil remembers coming home from school during harvest season and heading out to the barn to find all the pears laid out on newspapers across the wooden floor. He would tiptoe gently through the tender fruit ripening in the warmth, looking for just the right one, before biting into it and savoring the sweet juices.

The farm had a variety of fruit trees and berries, along with green beans and other vegetables. He picked raspberries at a neighbor’s farm. His family raised their own beef, pork and chicken, as well as a steady diet of farm-fresh eggs.

“I ate pretty good growing up,” he says. He still likes to joke, looking back on their childhood, that he’s still the tallest among his seven siblings because he ate “the most and the fastest.”

The importance of fresh, quality food is something Phil has focused on during all of his more than 30 years at Market of Choice. He’s worked at several stores over the years; now he’s an Assistant Produce Manager at our Delta Oaks store in Eugene.

His favorite part of the job is how the mix of produce changes with the seasons. “It’s the same but always different,” he says. “We make sure it’s all put out there the right way and looking good for customers.”

While most of his time has been spent receiving and displaying fruits and vegetables, Phil has also worked in various roles and knows the company’s operations inside and out. He’s often sent on temporary assignments to help open new stores and train employees. He enjoys the variety and getting to know people at different locations.

“They like to send me to different openings,” he says. “I can do everything.”

Getting to know his customers is a perk, as well, Phil says. “It’s great seeing the long-time customers you see every day – not for days, or weeks, or months, but for years,” he says. “They become friendships.”

His wife, Christina, has worked for the company for 21 years. She started out as a part-time cake decorator and now oversees all of the Bakeries as Bakery Sales Manager.

In his off time, Phil enjoys camping and bike riding. He’s been an avid bicyclist since his childhood, riding his bike home from high school to the farm. He’s gone on bicycle tours around the state and ridden his bike to the Oregon Coast. Phil also looks forward to regular get-togethers and barbecues with his big extended family.

From farm to market, Phil has enjoyed the ride. Phil says Market of Choice has been a great place to work and has always been a good fit for both him and his wife. He values his many years with the company and the people he works with every day.

“They’re like my second family,” he says. “I look forward to coming to work.”