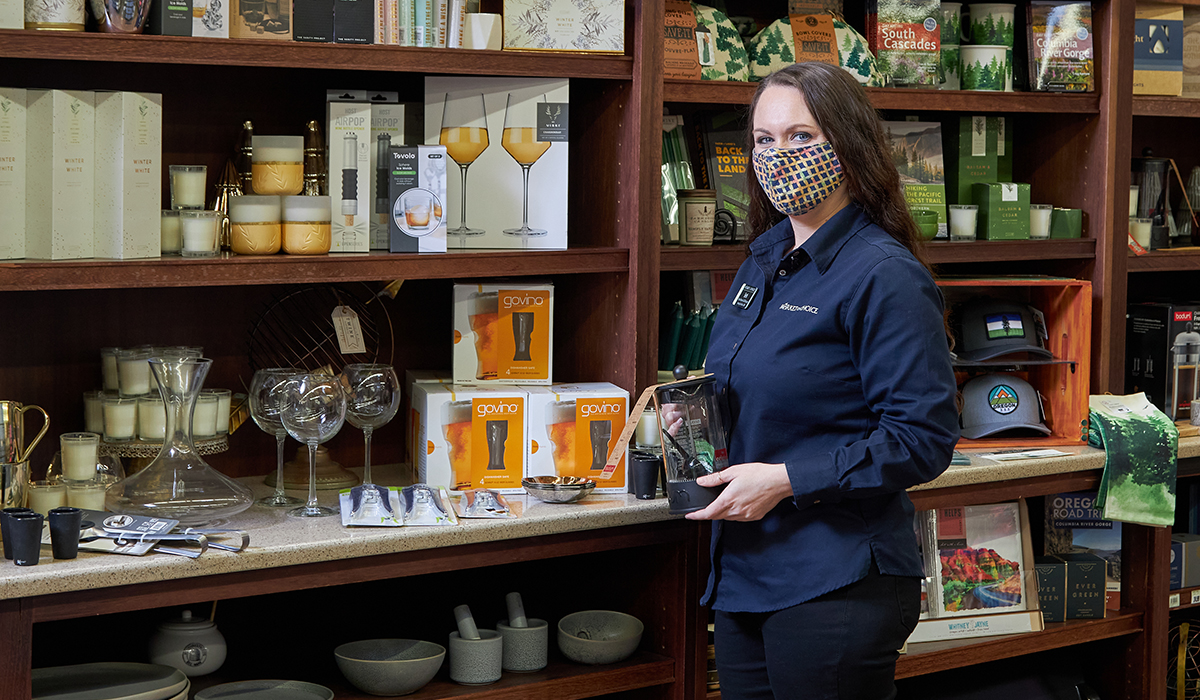 Floral and home design are at the heart of Beth’s work every day, but it’s the special moments that she gets to be a part of that really mean the most to her. Gifts and cards and flowers, in particular, are avenues to create connections with her customers at important times in their lives, whether it’s a first date, prom, wedding, anniversary, birth or celebration of live.

Beth laughs a bit as she remembers a customer — an “older gentleman,” she says — who approached her at the counter with a special request. He confided that he had not dated in quite some time, but he’d recently met someone special and they were planning a first date. He was excited about it, but really nervous. She told him not to worry — she’d help him put together just the right bouquet.

Beth wondered over the next few days how the date turned out, so she was thrilled to see him back in the store a few weeks later.

Those kinds of special moments are a big part of what Beth enjoys about her job as Manager of our Home & Gift and Floral Department in Corvallis.

Beth has worked with flowers and plants, which she calls “her passion,” since 2005. She’s been with Market of Choice for most of that time, starting out in Eugene before moving to Corvallis on the day it opened in 2010.

She’s worked in other departments for Market of Choice, as well, but she loves the Home & Gift department most of all because of the opportunity to work in floral and home design.

She got her start in the floral business while attending school and working for another employer when, out of necessity, she was asked to help with flowers for Valentine’s Day. She caught on quickly, became a top seller, and even changed her major to study business with the thought of opening her own flower shop one day.

Beth has found, however, that working for Market of Choice makes it possible for her to care for and come into contact with many more customers and work with a wider variety of products than she ever would in a small shop.

“It’s such an amazing opportunity to work for this company. I’m able to showcase more than I ever could on my own,” she says.

To stay up to date on new design trends, Market of Choice has sent her to conferences and showcases to learn from other designers. She has found inspiration in her own research, as well, including studying Constance Spry, a legendary British floral designer from the mid-20th century. “You’ve got to look to the past to see the future,” Beth says.

She’s also learned to be more open to other people’s personal preferences, when it comes to choosing which items to display in the store. Just because something might not interest her, she says, others very well may be, so she aims to diversify her offerings to cater to a wide variety of tastes.

“It’s not all about what you like,” she says. “That can be a hard lesson to learn. You have to be flexible.”

With the constant variety of seasonal and standard items, her job never gets dull. “We have a lot of different things to make the house feel like home,” she says.

When she’s not working, she loves getting outside, where she can combine and pursue more of her passions. She’s been into photography since being a yearbook photographer in high school and enjoys hunting for mushrooms – not to eat, but to photograph.

“On my weekends, you’ll find me on a trail somewhere,” she says. “It’s one of the reasons I live here in Oregon.”

Beth says she’s happy to have found a place to practice her crafts and enjoys working for an “amazing family-owned company,” she says. “It’s been a joy and an honor to work for Market of Choice, and I look forward to doing it for years to come.”